A downloadable game for Windows, macOS, and Linux

Ever heard of Robots becoming sentient and taking over humanity?
Ridiculous! Bots are extremely stupid! They can’t even make it through a room full of deadly obstacles, nauseating heights and tiny platforms using nothing but a powerful grappling hook - without human support at least.

So why not help them?

“Bots are stupid” is a 2D Platformer/Puzzle Game where instead of using live inputs to control the character, the player has to program precise instructions for his Robots to follow to make it through the level.

Step into the role of Central Locomotion Officer in a futuristic factory built to assemble and train the world’s most sophisticated machines since the invention of the Roomba.

Your supply of robots is endless so no matter how many crashes and explosions it takes, there is always a way to make it through the test chambers. But remember: the fewer commands the better!

Just trying again. If anyone can please tell me why the introduction isn't finishing, that would be great. Thanks!

Sent you a mail couple of weeks ago, please make sure it didn't end up in your spam folder :) would love to help!

For some reason, my demo download won't open and it quits unexepectedly. I also tried the Steam version, but cant finish Introbot's introduction. What am I doing wrong? Please write LHollman2@schools.nyc.gov.

I was wondering if you have a discord server for this game, where people can talk about it and ask questions.

This game is a very cool idea. I've done a lot of TASing in the game Remnants of Naezith (where I'm also the #1 player) so I've got experience in this kinda thing(The fruits of my and JSL's labor). I played it a bit and have some issues that I wanted to point out (this will be long winded, sorry!):

First, there seems to be a lot of trial and error involved just to get waits perfect, especially on 1000 tickrate. This is fine in principle, but the game gives no tools to optimize this process which makes it very tedious.
Some of the things that the Naezith TAS tool has that I'm missing in this game are:

There's also some other things that would be very useful for optimization, for example:

Finally, some other things that bothered me about the gameplay itself:

In conclusion, I want to like this game and I want to like trying to optimize in this game, given that I have enjoyed putting over a thousand hours into just TASing Naezith.
However, I found it to be very tedious to program, and found the optimal mechanics honestly uninteresting. You just end up ground hooking to go fast and doing tiny hooks to get around corners. Especially given it's the main mechanic of the game, hooking is way too punishing.

Oh also I totally understand that changing the whole physics by this point is probably not something you want to do. Just putting it out there.

Loved the idea bro, keep it up 💪

I just found this game yesterday on steam. I'm having a lot of fun, just wanted to feedback that you can trick the game into thinking you have zero lines of code by using CAPS.

Since campaign level's instructions are stored in the .exe/Content folder for stable version and not in the AppData folder, they don't stay between versions.

That's pretty annoying since i had a lot of very optimized scripts in the campaign levels, especially a 152 lines WIP extreme 2 script that would break the record by about 1.6s and i don't want to lose it or rewrite it.

Definitely sounds like a pretty annoying problem but I think your old instructions should still be safe.

Since the Levels haven't changed between 1.1 and 1.1.1 you should be able to simply replace the .xml files.
You can find the new levels at
"C:\Users\[YourUsername]\AppData\Local\Temp\.net\BotsAreStupid\[RandomID]\Content\Levels\". Just delete those and replace them with the ones from the stable folder.

This should do it, please let me know if it worked!

Will definitely look into an alternative way of saving instructions for the next update to fix this.

Thanks for letting me know =)

I'm trying to play your demo but it won't let me complete the Introbot. It does nothing after I select the first three commands.

What am I doing wrong? Please write LHollman2@schools.nyc.gov.

This game is great so far. I have the global record on one of the levels, and I'm trying to refine others.

There is one niche complaint, in that an orb takes time to get to the gate. That means that you can pick something up and go towards the exit, but get there before the game does and overshoot. It's working as intended, but it feels a touch wonky to have to go spinning around until it gets there.

Glad you enjoyed!
Not sure what to do about the orb, since it's already been sped up a lot in the last patch. It's probably going to stay like that for the time being though. :)

I Love it.
I just finished playing, i'm really surprised by the quality of the game, i didn't expect such level.

The gameplay is a really good idea and it works very well.
The editor and its online function are a also a good surprise.

The only thing that bothered me while playing is that i could not skip the tutorial, you can replay it but not skip it, it may be a bit long.

You did an amazing job out there, thank you.

You can actually skip the tutorial by pressing "Clear Instructions" in the pause menu but I'll have to add a more obvious alternative.

Great game BUT if I didn't finish level 1 I wouldn't say it was extremely bad.
Level 2 is good, the tutorials are great but the level 1 is just messy and awful. The use of every mechanics wasn't explained so level 1 is just a brute-force thing with 10 seconds of delay between each try.
You should put level 1 at the end of the game and make another level 1. It's hard to finish it because we don't know how to use the grappling (especially in close spaces).

Advice for another level 1 :
- More space to work
- learn steps by steps and not by throwing every possible mechanics in the first level

I'm looking forward for other updates and more stages made by the community, keep the great work, there is a lot of potential in your game.

Thanks for the feedback! :)
I'm currently working on a better tutorial where features and new commands are introduced level by level.

the first level where you have to write your own code, not the one with animation and already made code

A Linux ARM8 version would be awesome for those of us who use a Raspberry Pi 4 as a desktop machine on a regular basis. ;)

Yeah I'll add a build for that. You'll need to tell me if it works though :D

Edit: Was told it crashes instantly, had to remove.

Glad you enjoyed it!

Welcome.  Love the idea.  It reminds me.  Of Robo Rally.

Great game but here are my opinions:

I have more ideas so if you want we could contanct through discord or whatever and talk more. And btw found out about this through reddit.

Thanks a lot for your feedback! I will definitely consider some of your suggestions for the next update. Those advanced commands could really be useful =)

The easiest way to send feedback is probably using the dedicated button in the credits menu in-game. 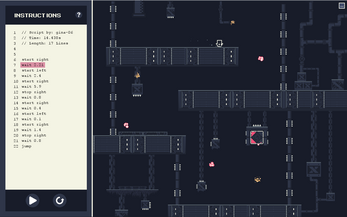 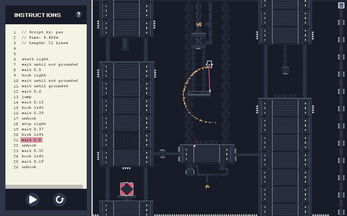 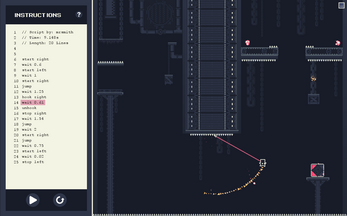 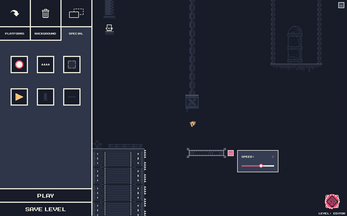